Paul is a graduate of the University of Guelph. He is a regular speaker at garden clubs and horticultural trade shows both in Canada and the United States. He has also made several TV appearances. In July of 2002 Paul was awarded the Young Professionals award by the Perennial Plant Association The front yard of Paul and Uli’s home was awarded first place in the environmental garden category in the 2001 City of Toronto Garden Contest. In 2003 it was awarded the Best Use of Plant Material in the City of Toronto West District Garden Contest. More recently their home garden has been featured in Canadian Living, Gardening Life and Canadian Gardening. In 2009, watch for more of Paul’s container designs in Canadian Gardening. For nearly 20 years Paul was employed at Plant World, a large, west-end garden centre where his primary role was that of the perennial department manager. This year Paul has accepted the exciting position of the Director of Horticulture at Toronto Botanical Gardens.

A Harvest of Coral Mushroom June 2022 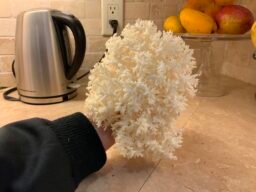